The town Tábor is one of the most beautiful South Bohemian towns. It is an important cultural and economic centre of the region, the second largest town in South Bohemia.
It lies on the Lužnice river about 60 km north of the town České Budějovice, 437 m a.s.l.

The history of this well-known centre of the Hussites dates back to the 13th century - some sources allege the existence of the prehistoric Celtic hillfort in the 1st century B.C. The town with the castle were founded in about 1270 by King Premysl Ottakar II in the strategic position on the rock spit above the valley of the Lužnice river. First it was called Hradiště nad Lužnicí ("Fort Above Lužnice"). It was soon destroyed. The castle, later called Kotnov, was built in the 14th century near the old road to the town Sezimovo Ústí. In 1420 the Hussites built a new town called Hradiště hory Tábor ("Fort of the Tábor Mountain") around the castle. It became a royal town in 1437. The second town walls were added during the 1430's and 1440's and Tábor became the best fortified town in Europe. After the beginning of the Thirty Years' War Tábor was besieged for one year by Emperor's army and then it was captured. It lost all properties and holding rights. The decline was crowned with the invasion of the Swedish in 1648. The new growth began in the 19th century again with the oncoming of industry and railroads. 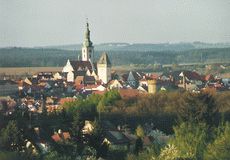 Only the remains of the town walls, the Žižkova Bašta (Žižka's Bastion) and the Hořejší Vodárna (Upper Waterworks), the tower adapted in the Renaissance style, have been preserved. The Bechyňská Brána (Bechyně Gate) has been preserved below the round tower of the Kotnov castle from four original gates. The castle was destroyed at the turn of the 17th century and the tower was rebuilt into a observation tower.
The centre of the historical part of the town is the Žižka's Square with the dominant dean's Church of Transfiguration of Christ, which was built in the place of the original small wooden church.
On the western side of the square there is the Late-Gothic town hall, architecturally very important building. A town museum with the entrance to the old cellars with underground corridors, which run under the historical centre, are located there.
A Renaissance fountain with a statue of a knight from 1567 is in the centre of the square.
In front of the Church of Transfiguration of Christ there are sculptures from the workshop of I. F. Platzer from 1775 and the monument to the Hussite leader Jan Žižka.
Late-Gothic and Renaissance houses built between 1532 and 1559 stand around all the Žižka's Square.
An Augustinian monastery with the Church of the Nativity of Virgin Mary from 1640 stands in the small square not far from the Žižka's Square in the historical centre as well.

The tourist trail with several stops with informative notices leads along the places of interest in the town such as the garnet rock or the waterfall on the outlet from Jordán pond.

The pilgrimage Baroque Church of the Blessed Virgin Mary, which was built about 1700, can be found on the outskirts of the town in the location called Klokoty.
The oldest functional water reservoir in Bohemia is Jordán pond founded in the 15th century. It is about 50 ha large and its maximal depth is 16 m.