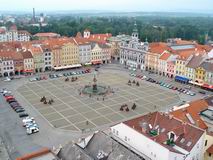 The Czech King Premysl Ottakar II established the town České Budějovice in 1265 as a royal town. For a long time the town was a buttress of Czech kings in the region. The historical centre was planned as a complex protected from two sides by the Vltava and Malše rivers, with a geometric web of streets around the square and with marked location of the Dominican monastery, which was founded together with the town.
The original name was Budějovice. In the 14th century it was an important centre of trade and crafts in South Bohemia and it surpassed other towns in the region. Kings Wenceslas II and Charles IV gave a lot of privileges to the town and they helped the town to develop quickly. The town was loyal to the rulers during the Hussite Wars (the first half of the 15th century) and during the revolt against Emperor Ferdinand I (1546 - 1547). Then it was rewarded with a lot of privileges. The silver mines were founded on the north-eastern outskirts near the village Rudolfov and between 1569 - 1611 also the mint was here. The new name of the town - České Budějovice - comes from this era too. 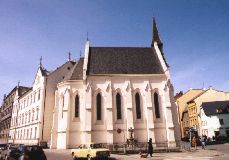 The Thirty Years' War and big fire in 1641 interrupted the growth of the town. The restoration was very slow and the new development started in the 18th century. In 1751 České Budějovice became a centre of the district around the town. A bishop's residence was established there during the Josephin's reforms (the end of the 18th century).
Till the 19th century České Budějovice was a small town enclosed in town walls, with less then 10,000 people. An important turning-point was the construction of the horse-drawn railway (about 1830) from České Budějovice to the North-Austrian town Linz, the first railroad on the continent (the first one in Europe was in England). During the 19th century the town walls were pulled down, the growth continued and the town enlarged to the present appearance.

Most of all historical and cultural sights are in the Square of King Premysl Ottakar II and around it in the historical centre.
The Samsonova Kašna (Samson's Fountain), the typical symbol of the square with archway of citizens' houses from the Renaissance and Baroque periods, towers above the square. The Baroque town hall stands in the south-western corner. The former monastery with the Church of the Offering of the Virgin Mary, one of the oldest parts of the town, lies near the square. The church was a part of the fortification, which was torn down in the 19th century. Only the remains of the town walls have been preserved, together with the tower called Železná Panna (Iron Virgin), Otakarka bastion (both on the bank of the Malše river) and Rabenštejnská Věž (Rabenštejn Tower). The most known building is the 72 m high Černá Věž (Black Tower). It was built in the north-eastern corner of the square in the 16th century. The Cathedral of St. Nicholas stands near.
In the "Old Town" there is the Church of Sts. John the Baptist and Procopius, which dates back to the 13th century as a parish church. Its present look is from the reconstruction in the 15th and 16th centuries. 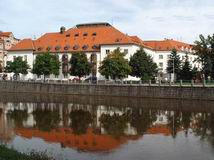 A lot of cultural institutions are located in the historical centre - the Napoleonic building of the South Bohemian Theatre from 1819, the South Bohemian Museum, the observatory and the planetarium, which stand above the confluence of the Vltava and Malše rivers.

České Budějovice is a birthplace of many important persons of Czech history, science and culture. The graphic designer and painter Vlastimil Rada, the graphic designer Karel Štěch, the explorer and writer L. M. Pařízek, the actor Eduard Kohout, etc. were born here.

Not far from České Budějovice, near the road Rudolfov - Lišov, one of seven basic points of the altitude mensuration in the former Austro-Hungarian Empire is situated. It is a stone pyramid called Locus Perennis, which is sometimes wrongly considered to be a centre of Europe.
On the north-western outskirts of the town there is the protected area Vrbenské Rybníky (Vrbné Ponds) with the nature trail.