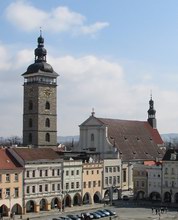 The Černá Věž (Black Tower) is the dominant feature of the town. It stands near the Square of King Premysl Ottakar II in the surroundings of the St. Nicholas' Church. It was built between 1549 - 1578 from stone blocks; the lower part is in the Gothic style, the upper part with a gallery and a cupola is in the Renaissance style. It was used originally as a belfry. Nowadays it is open to the public and its gallery offers nice views of the town.

Originally there were seven bells in the tower; now there are six bells. The biggest one, called Bummerin, is from 1723; it is 147 cm high and it weighs 3,500 kg. The other bells are Marta, Octava, Maria, Stříbrný (Silvery) and Budvar.