At the beginning of the 19th century the unique technical work represented Czech technical progress in Europe - the first and the longest horse-drawn railway in the "Old Continent" between the towns České Budějovice and Linz (Austria). 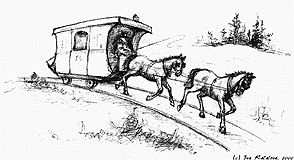 In 1807 the director of the polytechnical institute in Prague F. J. Gerstner, specialist of water buildings, looked into the possibility of connecting the Vltava and Danube rivers by a canal. He proposed, outside his area of specialisation, the construction of the railway. The construction, under the leadership of F. A. Gerstner (son of F. J. Gerstner), started in 1885. The first - Bohemian - part was already open in 1827 for testing. All the railway was finished on the 1st June 1830. The periodical transport of goods began in 1832, later it was used as a passanger train too. The team comprised two horses in line. It covered the total 129 km length in 14 hours.
The entire Czech part was subsequently used as a steam railway.

Just a few fragments have been preserved up to the present day - the station house in České Budějovice, part of the railway between stations in the small village Suchdol and the village Rybník, the bridge and the swap station in the village Holkov (near the small town Velešín).