The small town Velešín is situated about 18 km south of the town České Budějovice above the Malše river, 548 m a.s.l. 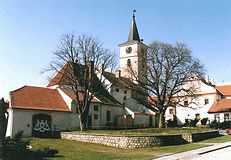 The Romanesque castle, one of the oldest castles in Bohemia, originally stood here. The settlement around the castle became a small town in 1391. The first owner of Velešín was Čéč of Budějovice. From the 14th century it became property of the Rožmberk family.

The remains of a round tower and walls of the former castle can be found on the rock spit above the Malše river.
Parts of the horse-drawn railway, which led from České Budějovice to the town Linz (Austria), are preserved near Velešín.