The town Písek is the third largest town in South Bohemia; it is an important cultural and economical centre of the region.
The town lies on the Otava river about 45 km north-west of the town České Budějovice, 398 m a.s.l. 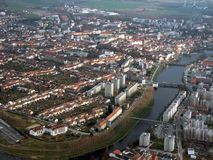 In the 13th century it used to be a settlement situated near the places of gold washing on the left bank of the Otava river. The name of the town dates from that time and it means "Sand". Later Písek became a trade village with the Royal Court.
In 1254 King Premysl Ottakar II founded a town in the place of this settlement and the royal castle was built above the ford across the river. A monastery, a dean's church and a stone bridge over the river were built. A mint was here from the end of the 13th century as well.
From 1308 Písek was a free royal town and from the middle of the 14th century it was a centre of the district. A salt-house and a cereal store, the biggest in Bohemia were founded here during the reign of King and Emperor Charles IV (the 14th century). During the Hussite Wars the town was captured by the Hussites and became their centre. At the time of the Thirty Years' War, in 1619 and 1620, the town was captured again and the inhabitants were slaughtered. Since 1641 the town was the royal town again and in the 18th century it became the centre of the district again. It was an important and well-known educational centre - in 1860 a secondary school, in 1884 a school for game wardens and in 1899 a school for foresters were founded here. During the centuries Písek was the owner of the largest town domain in Bohemia.

The centre of the town comprises the square, divided into two parts by block of houses - the western part with the castle and the eastern part, used as a market. Not far from the square there is a town theatre from 1902. Only the remains of town walls, demolished in the 19th century, have been preserved up till the present day - remains of the well-known Putimská Brána (Putim Gate), a part of walls along the Otava river and the tower called Baba (Beldame).
The Písek castle was founded together with the town and it is an important sight of the first Czech Gothic architecture.
The Early-Gothic stone bridge, which was built at the end of the 13th century, is one of the oldest stone bridges in Europe and the oldest preserved in Bohemia. 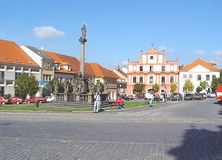 A dominant feature of the town is the dean's Church of the Nativity of Virgin Mary founded together with the town in its highest place. The monastery with the Church of Elevation of Holy Cross stands in the south-western corner of the lower square (western part). The monastery was closed in 1787. The original church was destroyed during the Hussite Wars and then it was rebuilt in 1636 and reconstructed in 1716. The single-aisled church has a tower from 1641.
In the western part of the lower square there is the Baroque town hall, which was founded between 1737 - 1764.
In the upper square, also called Small Square, there is the Baroque Marian Column from 1713. There is one of the most interesting buildings in the town, the Neo-Renaissance health centre from the 1880's as well.
The hotel in Art Nouveau style with 11 pictures of the history of the town, which were made after the original by the painter Mikoláš Aleš, can be found not far from the upper square. It originates from 1899.

The old power station constructed by František Křižík in 1888 stands on the bank of the Otava river. It was built for streetlight and there is a museum now.

On the outskirts of the town, near the road to the town Tábor, there is a sylvan cemetery founded in 1920 with graves of important Písek's citizens.
The town museum with mineralogical and archaeological collections and exhibitions of the history of the town and gold mining is located in the castle. The speciality is the exhibition of the history of fishing with aquariums.

The instructional trails Cesta Drahokamů ("Along the Path of Gemstones"), Čertova Stezka (Devil's Trail) and Lesnická Naučná Stezka (Forestry Instructional Trail) lead through the town or through its surroundings.