The stone bridge spans the Otava river in the centre of the town Písek. It is the oldest preserved stone bridge in Bohemia (originally the second after the destroyed Judita's Bridge in Prague). Only the stone bridge in the town Regensburg (Germany) is older in central and northern Europe. 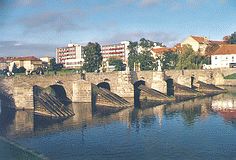 The date of construction is not known exactly. Chronicles mention that it was already used in 1348. There were two gates on both sides for the protection of it and of the current historical centre of the town. The left gate destroyed in flood in 1768, the right gate (on the bank near the centre) was demolished in 1825.
There are Baroque sculptures on the bridge pillars from the 18th century.

The bridge is built from granite blocks. It has six spans on pillars with edges against the stream. It is 111 m long, 6.3 m wide. The road leads 5.5 m above the river.