Český Krumlov is considered to be one of the most striking Czech towns. The unique medieval town centre with the huge and large castle is protected by the UNESCO and it is the second most important historical complex in Bohemia (after Prague).
The town has a scenic location on the slopes above the meanders of the Vltava river about 25 km south of the town České Budějovice, 492 m a.s.l. 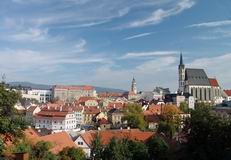 Originally there stood only an Early-Gothic castle on the rock spit on the left bank of the river. It was founded near the trade route to the town Linz (Austria) in the first half of the 13th century. The settlement called Latrán soon grew around the castle. A new town (present Old Town) was founded on the opposite bank in the second half of the 13th century. At the beginning of the 14th century the castle and the town became property of the Rožmberks. The town became an aministrative centre of the large region at that time. The town grew quickly under the ownership of the Rožmberks (more then 300 years). The development culminated in the second half of the 16th century, when the town acquired the Renaissance character, which has been preserved up till the present day. In 1611 the town was partially destroyed and its next development stagnated. Due to this stagnation the original medieval face of Český Krumlov has been preserved to this day. 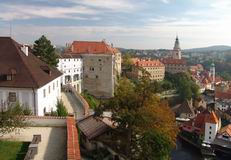 The most important and well-known sight of the town is the castle of the same name. It towers on the rock above the meander of the Vltava river. Its present appearance originates in the last reconstruction in the Baroque and Rococo styles between 1744 - 1767. The former settlement Latrán is situated east of the castle. It was enlarged in the middle of the 14th century, when the New Town was founded on the bank of the Vltava river. The town walls do not exist now, only the round bastion with the pyramidal roof from 1506 and the Budějovická Brána (Budějovice Gate), which was built at the end of the 16th century in the style of the Italian Renaissance, have been preserved up till present. The most important sight of historical interest in Latrán is the Minorite monastery with the Church of Corpus Christi and Annunciation of the Virgin.
The Old Town was founded in the elevated place, enclosed from three sides in the bight of the Vltava river. The place was only accessible from the east, across the deep moat. A lot of originally Gothic citizens' houses, which were mostly rebuilt into the Renaissance style, have been preserved in this part of the town. Not far from the square - the centre of the Old Town - there is the huge Gothic St. Vitus' Church, one of dominant features of the town, which towers above the bank of the river.
The Baroque Chapel of Our Lady of Sorrow was built on Křížový Vrch (Cross Hill) above the town in 1709. The place offers a lot of nice views of the town.
The underground graphite mine can be visited in the surroundings of the central parking-lot (about 400 m in the direction of the village Černá v Pošumaví).
The old wooden roofed bridge spans the Vltava river on the southern outskirts of the town, in the direction of the town Větřní.

The marked path (about 3.5 km long) leads through the town reservation.
The regional museum with exhibitions of the town and history of the surroundings is located in the former Jesuit seminary. The very important exhibition is the old Jesuit pharmacy.

The writer Rudolph Kalčík and the actor and dramatist Maxmilián Štván lived in Český Krumlov.