The town Větřní is situated on the Vltava river about 6 km south of the town Český Krumlov, 529 m a.s.l. 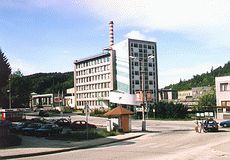 Větřní is first mentioned in 1347, when the original settlement, which had been under the ownership of the Rožmberks before, was sold to the Višeň family from Větřní. This family owned the village till 1603, when the town Český Krumlov bought it.
There used to be a fortress in the town. It was rebuilt at the end of the 17th century and then it was used as a school.
The Church of St. John Nepomucene, which stands above the town near the road in the direction of the village Frymburk, was built at the end of the 1930's.

The paper-making production has been traditionally in Větřní. The paper-mill was founded on the outskirts of the town after big fire of the former paper-mill in Český Krumlov. The production and importance of the paper-mill grew and it became one of the biggest South Bohemian paper-mills.

The instructional trail Větrník leads on the slopes of Větrník hill in the neigbourhood of the town.