The town Strakonice is sometimes called "the town of pipers". It lies on the confluence of the Otava and Volyňka rivers about 45 km north-west of the town České Budějovice, 393 m a.s.l. 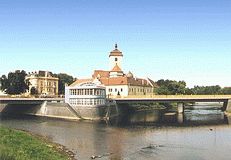 The first mention originates from the first half of the 13th century, when a castle was built here (1220 - 1235). The settlement, which arose around the castle, was known as a small town around 1300. It was divided into the so-called Lower Town (or Smaller Town), which stood on an island in the Otava river (not far from the confluence with the Volyňka river), and Upper Town, which lay on the trade route called Boubínská Stezka or Vimperská Stezka (Boubín or Vimperk Path) on the bank of the Otava river. The Lower Town was the seat of the order of the Hospitallers of St. John of Jerusalem. The order controlled the town from 1242 and in 1402 it became the owner of the whole domain.
Strakonice was promoted to a town in 1367. Its biggest development started in the 16th century, but it was stopped by the Thirty Years' War - the town was damaged and it was plundered twice (in 1619 and 1641). The new boom came in the 18th century. In 1776 a guild of stocking-weavers was founded and the production of hats started here. At the beginning of the 20th century a new factory for the production of guns was built in Strakonice. Later bicycles and motorcycles were produced in this factory as well.

The most important and the oldest sight in Strakonice is the castle, which stands near the square on the right bank of the Otava river. Here we can see the junction of the manorial seat with the commandery of the Hospitallers of St. John of Jerusalem, which is unique in South Bohemia. The monastery with the St. Procopius' Church, which was built in a style similar to the St. James' Church in Regensburg (Germany), stands in the southern part of the castle.
The park with the Late-Napoleonic arbour (1837) was founded on the remains of former town walls.
Several Baroque and Napoleonic houses have been preserved in the square. The dominant feature in the square is the Baroque Marian column (1730 - 1740), which was probably built in the place of the older one - the date on the pedestal is 1586. The Renaissance St. Margaret's Church, which is situated not far from the castle, was founded at the end of the 16th century in the place of an older sacral building.

The important Czech poet František Ladislav Čelakovský was born in Strakonice. A statue of him by the sculptor Břetislav Benda is located in the town. Another important person of Strakonice was Josef Skupa, the creator of the well-known puppets Spejbl and Hurvínek.

Strakonice is a well-known centre of South Bohemians bag-pipers.
The regional museum can be visited in the castle.

The instructional trail Podskalí leads through the town along the Otava river.

The ruins of the former castle and the Baroque mansion Střela can be found on the small hill about 2 km west of Strakonice above the road to the village Katovice.