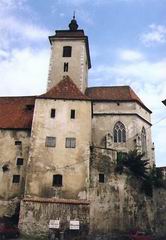 The two-aisled St. Procopius' Church was built on the trapezoidal layout together with the castle in the 13th century. Its original apse was replaced with a quadrilateral presbytery with the spiry sacristy at the end of the 13th century. A huge tower was added during the Baroque reconstruction between 1714 - 1722.
The central nave and presbytery are arched with the Renaissance ribbed cross vaults from the 16th century.
The Romanesque rostrum stands in the western part of the nave on the four prismatic pillar columns. It is accessible through a valuable portal from the middle of the 13th century.
The furnishings are mostly in the Baroque style from the first quarter of the 18th century. The main altar originates from 1788, the Gothic wall paintings are from about 1340.

The monastic Elysian court, which is enclosed with the four-winged arcade, joins the church. It originates from the 13th century and it is arched with the Early-Gothic cross vault.
In the monastery there are important wall paintings and figures from the beginning of the 14th century. They comprise the biggest and the most valuable collection of the Czech paintings of the first half of the 14th century.