The village Radomyšl is situated 8 km north of the town Strakonice, 455 m a.s.l. 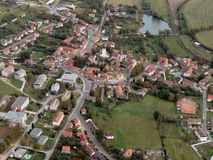 It used to be a profusely inhabited place on the crossing of the trade routes in the 12th century. The old Slavonic burial ground, which was explored in the 1960's here, supports this fact. The village is first mentioned in 1284 and then in 1320. The most important owner was the order of Hospitallers of St. John of Jerusalem from Strakonice.

The most important sight of the village is the Romanesque St. Martin's Church, which was rebuilt into the Gothic style in the 13th - 15th centuries.

The Baroque Church of St. John the Baptist stands in the cemetery on the hill about 1 km south-east of the village. It was built in 1736.
The karstic cave, which is about 45 m long, can be found in the former stone pit about 2 km north-east of Radomyšl.