The village Kestřany is situated 8 km south-west of the town Písek, 373 m a.s.l.

Its first mention dates back to the beginning of the 14th century, when it was the seat of Albert of Kestřany. Through time the village was divided into three parts, each of them with its own fortress. In 1491 they became property of Jindřich of Švamberk, who connected all the parts. Since 1700 it has been under the ownership of the Schwarzenbergs. 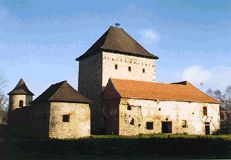 Two of three original fortresses have been preserved up to this day - an upper and lower one. They are considered to be the best preserved fortresses in Bohemia.
The Upper Fortress was probably built on the small knoll in the 1260's. It was enclosed by a water moat and was accessible through a drawbridge to the Gothic gate. The oldest building - the burgrave's house with the Early-Gothic vaults - stands in the small courtyard. The fortress was rebuilt at the beginning of the 16th century, when the walls with the small round bastion, two huge towers (keeps) and the wing of the palace were added.
The Lower Fortress originates from the beginning of the 15th century. The central building is the huge two-storeyed keep, which stands in the middle of the fortified courtyard.
The third fortress was destroyed and a Baroque mansion was built in its place. The mansion was destroyed during the communist era after the Second World War.
The originally Gothic St. Catherine's Church stands in the park in the centre of the village. It was reconstructed in the Baroque style in the 17th century.