This valuable flatland around the town Třeboň has been the Biospherical Reserve of UNESCO since 1977. The Protected Landscape Area Třeboňsko was established here in November 1979. It extends to the south-eastern part of the Czech Republic along the Czech-Austrian border. Its area is 700 square km.

This country is valuable due to its variety and richness of vegetation. There are large coniferous and mixed forests and a lot of rare hydrophilic plants grow in local marshlands. Several meadows with many plants from orchid family can be found there too. It is the renowned place of the rich occurrence of the flora of stagnant and running water; the hydrobiological branch of the Botanic Institute of the Czech Academy of Sciences was founded here for research. 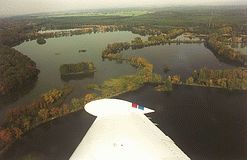 This land is rich in various birds, most of all waterfowl. The world-famous ornithological reserve Velký a  Malý Tisý (Big and Small Tisý) was established near Třeboň for the observation of birdlife.

Twenty eight most valuable and rare parts of the Protected Landscape Area Třeboňsko are protected in smaller areas with the superior protection. Some of them are nature reserves: Velký a  Malý Tisý near the small town Lomnice nad Lužnicí, a part of the original bed of the Lužnice river with remains of the riverine forest in the nature reserve Stará Řeka (Old River) not far from Třeboň, the peat-bog Ruda on the southern bank of the Horusický Rybník (Horusice Pond) and the peat-bogs Červené Blato (Red Marshland) and Žofínka, Bukové Kopce (Beechen Hills) near the small town Chlum u Třeboně, Horní Lužnice (Upper Lužnice) on the upper reaches of the Lužnice river near the small village Dvory nad Lužnicí, Vlkovský Přesyp (Vlkov Sand Dune) not far from the town Veselí nad Lužnicí, Záblatské Louky (Záblatí Meadows) near the village Záblatí, etc.

Several instructive trails lead in this region. The nature trail in the peat-bog Červené Blato gives information of the most interesting places in this peat-bog, Cesta Kolem Světa (Trip Around Svět) runs around Svět pond ("World"). On the dam of the Svět pond there begin the cyclotrails Okolo Třeboně (Around Třeboň) and Rožmberk.