The town Kaplice is situated about 29 km south of the townČeské Budějovice and about 17 km south-east of the town Český Krumlov. It lies in the Soběnovská Vrchovina (Soběnov Uplands) on the Malše river, 537 m a.s.l. 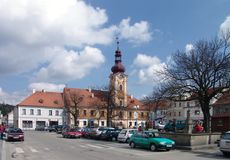 It used to be a market village on the trade route from Prague to Linz (Austria) in the 13th century. It became a town in 1358. From 1434 it was under the ownership of the Rožmberks - an important South Bohemian family. During the Thirty Years' War the town was germanized. The development of the town stopped with a lot of fires and it is the reason, why most of the preserved sights originates from the 19th century. 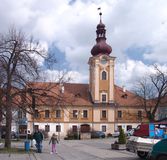 A few buildings from the Renaissance period can be seen around the square. The most important is the town hall with the tower from 1555. It was rebuilt in 1839 for the last time.
The dean's Church of Sts. Peter and Paul was built in the place of the original Early-Gothic church from the 13th century, which was destroyed by fire in 1507. The new Late-Gothic two-aisled church is arched with the tracery vault and it has the Pseudo-Gothic furnishings.
The so-called Czech Church (St. Florian's Church) stands next to the Church of Sts. Peter and Paul. It was founded in about 1500 in the place of the older chapel. The single-aisled church has a pentagonal presbytery and it is arched with the tracery vault. The valuable furnishings are from the turn of the 18th century.
The former Chapel of Sts. Joseph and Barbara can be found about 200 m west of the square.
Not far from the railway station there is the monument which commemorates the so-called "Train of Death", which drove people from the death camps through Kaplice in January 1945.

The noted pedagogue Ferdinand Kindermann lived in Kaplice in the 18th century.