The large plain Třeboňská Pánev (Třeboň Basin) lies around the town Třeboň. It extends to the Czech-Austrain border on the south (near the town České Velenice) and to the town Veselí nad Lužnicí on the north. The eastern border of this area is formed by the Lužnice river and the western boundary is formed by the Lišovský Práh hillycountry (Lišov Threshold). The average altitude of the basin is between 400 - 500 m a.s.l. 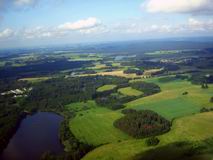 A lot of peat-bogs and marshes originated here due to the small declivity of rivers, insufficient drainage and badly permeable subsoil. The largest peat-bogs can be found in the area between Třeboň and the small town Suchdol nad Lužnicí. Most of them are protected.
A lot of ponds were made here in the Middle Ages and this area became the most important and best known region of ponds in Bohemia. The best known ponds are Svět (World), Rožmberk (the largest Czech pond), Horusický Rybník (Horusice Pond), Dvořiště, Staňkovský Rybník (Staňkov Pond), etc.
Many nature and historical places of interest can be found here. The main watercourses of the Třeboňská Pánev is the Lužnice river and its tributary the Nežárka river, which empties into the Lužnice river in Veselí nad Lužnicí.

The big concentration of places of nature interest in this area is the reason, why this region has been the Biospherical Reservation of UNESCO since 1977 and why the Protected Landscape Area Třeboňsko was established here in 1979 on the area 700 square km.