The mountain town lies on the Czech-German border in the Protected Landscape Area Šumava, near the border of the National Park Šumava. It is situated at the foot of Špičák and Pancíř mountains near the small river called Řezná, about 20 km south of the town Nýrsko, 754 m a.s.l. 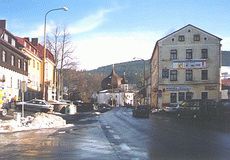 It was founded in the surroundings of finding places of iron in the first half of the 16th century. The settlement, which was first named Hutní, arose in deep forests near the trade route from Regensburg (Germany) to Prague. It is first mentioned in 1569, when it was property of the Rýzmberk castle. During the period 1579 - 1757 the village belonged to Bavaria (area in Germany along the Czech-German border). At the end of the 16th century the first smelter was built here and the village was renamed to Železná Ruda. In the 17th century the iron mining declined, but the glass-blowing developed well. The first glass-works were founded in 1692 and later more than 10 glass smelters arose in the surroundings. The smelter in Alžbětín (a part of the present town on the borderline) was one of the most important and biggest ones in the Šumava mountains in the 19th century and it was well-known due to the production of the special sheet glass.
The glass-maker and industrialist Jan Jiří Hafenbrädl bought the village in 1711. He and his descendants developed the glass-making till the 19th century, when the glass-works declined and later they were closed.
In 1877 the 2 km long tunnel through Špičák mountain was created and the construction of the railroad, which connected Bavarian railways, was finished. The existence of the railway started the new growth of trade and tourism in Železná Ruda.
Železná Ruda has had the status of the town since 1960.

The dominant building of the town is the Baroque Church of Our Lady of Succour. The untypical church was built between 1727 - 1732 in the place of the original chapel from 1694. It has the dodecagonal layout with six trapezoidal chapels. The tower was added in 1777.
The museum of glass and glass-making is located in the house of the former local glass-maker K. Abel.
A speciality is a common railway station, which is used for both the town Železná Ruda and the German village Bayerisch Eisenstein - the border goes through the railway station hall.

The 14 km long instructional trail with 12 stops begins in the centre of the town. It joins the places of interests in the surroundings.
The small chapel - a reminder of the former settlement Hůrka - can be found about 10 km north-east of the town.