The Šumava mountains (Bohemian Forest) is a large mountain range along the southern Czech border between the Vyšebrodský Průsmyk (Vyšší Brod Defile) and Všerubský Průsmyk (Všeruby Defile). It lies between the small towns Vyšší Brod (near the Czech-Austian border in South Bohemia) and Všeruby (near the town Klatovy in West Bohemia). It is the spring area of the biggest Czech river Vltava and of the important South Bohemian river Otava (the tributary of the Vltava river).

The Šumava mountains is about 120  km long and they lie on both sides of the border. The German part is called Bavarian Forest. The width of the mountain range is about 45  km. 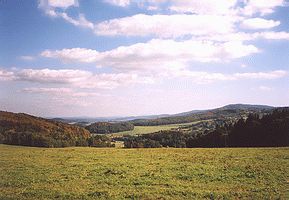 The Šumava mountains are very well preserved, untouched and valuable area. The Protected Landscape Area and the National Park Šumava with many reserves were established for its protection and they cover virtually the whole mountain range.