The dam, holding the reservoir with the largest water area in the Czech Republic, was built on the upper reaches of the Vltava river near the village Lipno and it is used as a hydro-electric plant. It lies about 20 km south of the town Český Krumlov and 8 km west of the small town Vyšší Brod near the Czech-Austrian border. 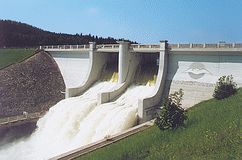 There are two sections of the hydroengineering structure. The main (upper) is the dam Lipno I. The other is the lower dam called Lipno II, which is located directly ahead of Vyšší Brod, with compensatory reservoir for water running from the upper dam. The hydroengineering structure was built between 1952 - 1959 and it is the first step of the cascade of dams on the Vltava river (it was the fourth one built - before it dams near Vrané, Štěchovice and Slapy dammed the flow).
The history of the hydroengineering system near Lipno is much older. The first realistic project to break the upper reaches of the Vltava river and to build the dam was in 1892. In 1899 the project of building more dams on the upper reaches of the river was prepared, but owners of the grounds along the river were against the project. In the 1930's the next analysis of the dam near Lipno was processed by the state. The Second World War prevented the plan and the new one was developed in 1948 and it became a keystone for the eventual version.

The dam is called "the South Bohemian Sea". It is the largest water area in Bohemia (4,659 ha). It is 44 km in length and its maximal width is 10 km (near the village Černá v Pošumaví). The average depth is 6.5 m, the deepest point is at 21 m. The reservoir contains 306 million cubic metres of water.

Below the dam the unique hydroelectric power station was constructed. It is located in the man-made cave in the rock massif, with a depth of 171 m. The cave is 37 m high and there are two Francis turbines. Through the 3,600 m long underground tunnel the water drains to the auxiliary reservoir Lipno II.

Water from the reservoir is used for the production of electricity. The lake and its banks are used for recreation.

The road from Vyšší Brod to both the village Lipno and the village Frymburk leads across the dam.