The town Prachatice is one the most beautiful towns in South Bohemia. Its Renaissance historical centre is the protected reserve.
The town is situated in the Šumavské Podhůří (Šumava Foothills) below Libín mountain on the Živný Potok stream, 561 m a.s.l. 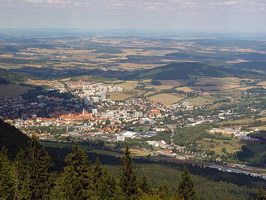 It used to be a settlement on the trade route called Zlatá Stezka (Golden Path), which was used for the transportation of salt to Bohemia. It probably lay in the place of the present town Staré Prachatice (Old Prachatice). The new settlement was founded in the 14th century around the square, together with the church, which is situated in the corner of the square. It is first mentioned in 1323 as a town with the license to crenellate. The importance of the town grew quickly and the town obtained a lot of rights and privileges due to its advantageous position - e.g. the rights of the import of soles, warehousing and the sale of salt from Passau (Austria). In 1420 the town was burnt down by the Hussites. After the short twilight the growth started again and in 1436 Prachatice became the royal town. The biggest boom started in the 16th century and all the town passed the large Renaissance reconstruction, which is also the present appearance. During the Thirty Years' War Prachatice was captured and all rights and privileges were seized. The town declined and the new development began in the 20th century. 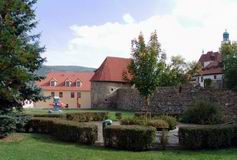 The Late-Gothic and Renaissance face of the historical centre of the town has been preserved up till this day, because of a long building stagnation, which lasted for hundreds of years. The remains of the town walls from the 14th century, which were enlarged in the 16th century (the second line of walls and artillery bastions were added), and the Helvít bastion can be seen in the town. The entrance to the historical centre is through the huge Gothic-Renaissance Dolní Brána (Lower Gate), which is the only preserved gate from three original town gates.
The so-called Žižkova Skála (Žižka's Rock) lies not far from the Dolní Brána gate. It offers a nice view of the town.
One of the oldest buildings in Prachatice is the dean's St. James' Church in the corner of the square, which was founded together with the town. 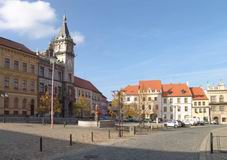 The centre of the historical part is the square with the Baroque fountain. The dominant feature is the new town hall. It originates from 1903 and it was built in the Pseudo-Renaissance style. The valuable Renaissance old town hall, which was built between 1570 - 1571, is located in the south-western corner of the square.
A lot of Late-Gothic (the second half of the 15th century) and Renaissance (the 16th century) houses can be seen around the square. Most of them have the facades with graffiti.
The town museum is located in the so-called Dům Žďárských (Žďárský Family's House) in the square.
The interesting marble sculpture is situated not far from the square - it is the biggest sundial in the Czech Republic.
The Spa of St. Margaret can be found on the southern outskirts of the town.

Prachatice is a hometown of the Czech pundit Křišťan of Prachatice.

Many instructional and nature trails lead around the town. The 33 km long trail called Zlatá Stezka (Golden Path) begins in Prachatice and it runs along the way of the former trade route. The nature trail for children, called U Irů Lípy (Near the Lime Tree of the Ira Family), goes in the outskirts of the town. The circular trail Prachatické Hradby (Prachatice Walls) leads along the town walls. The trail Kolem Prachatic (Around Prachatice) connects lookout places with nice views of the country. The Svatopetrská Stezka (St. Peter's Trail) acquaints visitors with the history of the town and its vicinity. The trail Pod Vyhlídkou ("Below the Vista") leads in the school nature reserve in the village Zdenice about 2 km east of the town.