The old-time town Nové Hrady ("New Castles") lies in the Novohradské Hory (Nové Hrady Mountains) near the Czech-Austrian border. It is about 30 km south-east of the town České Budějovice on the hill above the Stropnice river, 541 m a.s.l.

The history of the town dates back to 1279. It was known as a small village with the castle, which was built by the Vítkovec family for the protection of the trade route. Later the castle became property of the Lords of Landštejn and the Rožmberks. In 1620, when it was under the ownership of the Švamberks, the town participated in the revolt against the Emperor. Thereupon it was captured by the soldiers of general Buquoy, who became the new owner of the town. 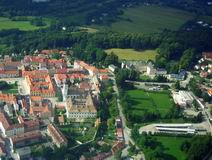 The castle from the end of the 13th century stands on the western outskirts of the town. It is enclosed by a huge moat. Only the remains of the original town walls (from the second half of the 14th century), which were connected with the fortification of the castle, and the town gate Dolní Brána (Lower Gate) from 1829 can be seen in the town.
One of the oldest buildings is the Late-Gothic Church of Sts. Peter and Paul with the monastery of the Servites. It stands in the south-eastern corner of the square.
The Renaissance town hall is located in the western part of the square. It was built in the 16th century and then it was reconstructed in the 18th and 19th centuries.
The residence of the Buquoy family, which was built between 1634 - 1644, can be found in the eastern part of the square.
The Boquoys founded the new Napoleonic chateau on the eastern outskirts of Nové Hrady between 1801 - 1810. It is situated in a large romantic park. The Pseudo-Gothic family tomb of the Buquoys has been located in the cemetery since the 1890's.