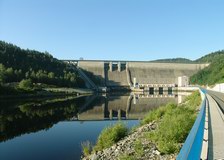 The Orlík Dam is the biggest dam in the Czech Republic. It dams the Vltava river near the village Solenice (near the town Příbram, about 10 km north of the castle village Orlík nad Vltavou). It is named after the chateau, which now stands a few meters above the dam. The majority of the dam, which flooded the deep rocky valley of the Vltava river, is located in South Bohemia.

The Orlík Dam was built between 1954 - 1961. A hydroelectric power station with four Kaplan turbines (adjustable-blade-type turbine) was built in the footing of the dam. The ship lift is also on the right side of the dam.
Near the dam there is a port of the summer boat transport on the dam. It joins the dam with the Orlík chateau and with the Zvíkov castle, which stands above the confluence of the Vltava and Otava rivers at the head of the dam.

The road connecting the town Milevsko with the region of the town Příbram goes over the wall of the dam (from Milevsko through the village Kovářov in the direction of Prague).