The castle and chateau Orlík towered high on the rock above the bend of the Vltava river (on its left bank) for many centuries. Its name means the "Small Eagle", because the castle's position looked like the eagle's nest. After completion of the Orlík Dam the valley below the castle was flooded and now water reaches the chateau.
The chateau lies about 12 km north-west of the town Milevsko. 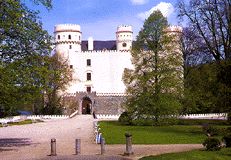 In the interiors there is a collection of weapons (rifles) and a valuable bookcase with 18,000 books (the oldest are from the second half of the 18th century). Around the chateau there is a large English park from the beginning of the 19th century. There is a natural gallery of wooden carvings there too.
The Neo-Gothic tomb of the Schwarzenbergs from the middle of the 19th century stands near the chateau.

The chateau is accessible by car from the village Orlík or by boat on the Orlík Dam (summer boat transport on the dam joins the Orlík Dam, Orlík chateau and the Zvíkov castle).

The instructional trail Orlík - Zvíkovské Podhradí begins near the chateau.