The village Strážný is an important border crossing to Germany. It is situated about 20 km south of the town Vimperk, in the valley below the Strážný mountain (1,115 m) with the ruins of the Kunžvart castle, between two tributaries of the Vltava river, near the border of the National Park Šumava (Bohemian Forest), 834 m a.s.l. 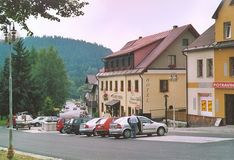 It used to be a settlement founded at the end of the 17th century in the surroundings of the Kunžvart castle, which was already in ruins at that time. The village was originally named after the castle. Kunžvart was a small and not important village till the 20th century. The importance and growth started with the development of tourism and trade in the second half of the 20th century.

The branch of the instructional trail Zlatá Stezka (Golden Path) passes through Strážný.