The Chýnov Cave is located 3 km north-east of the small town Chýnov (10 km east of the town Tábor). It is one of the biggest caves and the first declassified one in the Czech Republic. 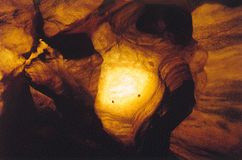 The limestone cave was discovered in 1863. It arose by the power of the water in the southern hillside of Pacova Hora (Pacov's Mount).
There is an underground system of small lakes in the cave with different depths - maximal is 37 m. The small stream runs through the lowest part. In the 1980's the big cave, about 100 m long and 30 m high, was found below the water level. The depth of discovered spaces grew up to 81 m. The length of discovered tunnels is about 1200 m, but just 220 m is accessible to the public.
A lot of interesting formations were created by water and various colours of marble, such as white, yellow and brown can be found on the walls of the cave. The typical stalactite and stalagmite formations for these kinds of caves are not found here.

The cave can be found on the road from Chýnov - the well marked way runs along the limestone pit to the parking-lot near the cave. Also the blue marked path leads to the cave from Chýnov (4 km).