The chateau Červená Lhota ("Red" Lhota), one of the best known water chateaus in the Czech Republic, stands in the village of the same name about 8 km north of the small town Kardašova Řečice (12 km west of the town Jindřichův Hradec). 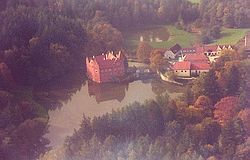 Entrance to the chateau (originally intended as a summer chateau only) is over the stone bridge (this replaced the original wooden bridge). Around the chateau there is a park with the crypt of the last owners (the Schönburgs) from the 16th century (originally the chateau chapel).