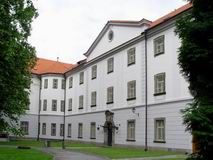 The first mention originates from the 13th century. In the 17th century the town became property of the Jesuits from Jindřichův Hradec, who built a Baroque residence here for education of priests. Later the branch of the Royal Regional Madhouse for adults was located in this residence. Since 1923 it has been used as a hospital for mentally handicapped children.

The Church of St. Francis Xavier adjoins the residence. It was built under the design of the K. I. Dienzenhofer between 1732 - 1735 in the place of the original sacral building. Its furnishings are from the same time and its interior is one of the most valuable Baroque works in Central Europe.