The large ruins of the Choustník castle are situated on the hill with the same name near the village Choustník, 12 km south-east of the town Soběslav, 680 m a.s.l. 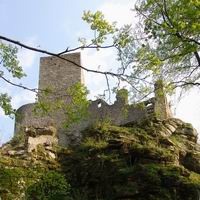 The Early-Gothic castle was built between 1262 - 1282. This unusual type of castle has two cures with separated residential palaces. In the 14th century it was an important strategic place of the Rožmberks and it became the so-called "gate of South Bohemia". In the 15th century the castle grew and a new massive and perfect system of fortification with round gun-bastions were built there. It stood the test of time, especially during the Hussite Wars, and it was never captured. From the end of the 16th century it dilapidated and since 1672 it has been in ruins.

The huge enclosure walls and both towers have been preserved - one of them is used as a lookout tower in present.

The green marked path leads from the village Choustník to the castle (1 km).

The nature reserve with rock towers and seas of stones lies on the ridge of the Choustník hill east of the castle.