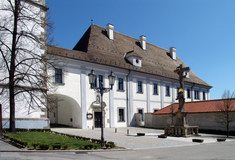 The Late-Gothic Church of Sts. Peter and Paul was founded in the place of the original church, which was built before 1284 and which burnt down in fire of the town in 1467. The new construction started in 1500 and it took 90 years. The thin tower was added in 1628.

The single-aisled church is arched with the lierne and tracery vaults. The gabled portal is from period after 1510. The valuable Early-Baroque furnishings are from period between 1672 - 1692.
The monastery of the Servites, the Baroque four-winged building with the Elysian court, was added to the church between 1679 - 1685.