The originally Gothic castle towers on the rock spit above the valley of the Stropnice river on the western outskirts of the town Nové Hrady. 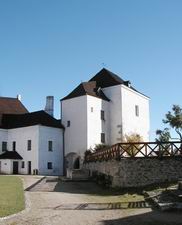 The oval layout with two gateways and a part of the curtain walls with four bastions have been preserved up till this day from the original building. The castle is accessible by two drawbridges.

The museum of glass, which contains the biggest collection of the black hyalite glass in the world, is located in the castle.